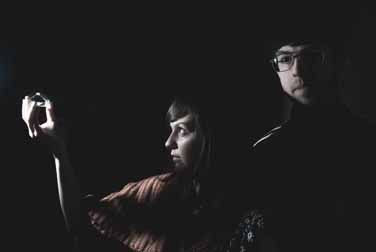 Conquering Animal Sound have had quite a year; the excellent reception for their debut record Kammerspiel earlier this year led to a highly successful European tour to follow, seeing the band go from strength to strength.

Tonight, Gizeh Records are giving a showcase and victory lap mini-tour to celebrate the success.

Accompanied by a violin and a guitar, Chantal Acda, dutifully performs her majestic but ultimately lo-fi songs with aplomb.

Not unlike CAS, their songs, despite different instrumentation, build and swell with as minimal sounds as possible.

It’s an effective tactic, though runs a little short of new ideas after a few songs.

Still, they are an enjoyable, atmospheric warm-up.

CAS’s return to Glasgow is a hugely enjoyable and welcome one as they showcase some new material that they plan to record early next year.

As mentioned, the venue is a little odd in that it’s so quiet, one feels very aware of the dark, sound-proofed and occasionally as a result sterile atmosphere of the place, but the duo’s performance cannot be faulted.

Their songs move in hypnotic fashion, causing much wide-spread swaying from the audience; enraptured in the layering sounds James Scott constructs with his various toys, and of Anneke Kampman’s soaring-yet-understated vocal style, often frittering between Scottish folk-y songstress and Bjork-like prominence.

It is an excellent and encouraging set from a band who seem to get better and better with every show and release, as they fill the room with ease and vitality (though I would have liked it a little bit louder).

An excellent night then for one of the years best new and more importantly, local, talents.

We can only wait with bated breath for what they’ll do in 2012.