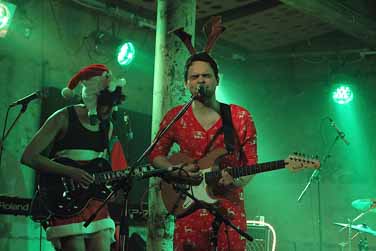 There Will Be Fireworks appear on stage all dressed up as if they had just finished a meeting with Santa himself backstage, from the elegant snowman to the joyful elf everyone in the band is celebrating the arrival of Christmas their own way.

Award of the best costume to Mr. Farrah (lead guitar), his interpretation of Mrs. Claus (very similar to my idea of a Christmas escort girl) is quite the treat.

The band is back on stage after a long period of absence and tonight they present their new EP, Because, because, giving us a glimpse of their forthcoming second album scheduled for release early 2012.

From almost the start of a mosh pit for ‘Off With Their Heads’ to the frontman, Nicholas MacManus, retaliating “I can’t do tapps aff it’s a onesie”, the night is definitely under the sign of bright humor and generosity.

Generosity, when MacManus steps back for once introducing the second song on the EP ‘This Feels Like’, a gentle ballad interpreted by Gibran Farrah.

The gig starts with energy and determination, they knew that they have been away for a long time and so we can feel they want to make amends. 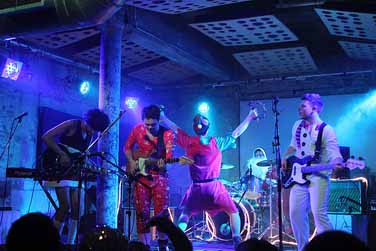 TWBF relies on intensity and their music provokes sparkle-like emotions, the band can bring a smile and tears on your face at the same time.

MacManus’s voice is piercing and fierce and leaves you vulnerable, the melodies are hard-worked and slashing making you feel nostalgic in the present time.

Their new EP shows a different turn in the band, the raw and almost violent sound of certain tracks is toned down to present three new tracks that accentuate the band’s romanticism.

The audience does not require any ‘fireworks’ to become agitated and reckless, every single new song is welcome as a present (Christmas period obliged comparison), this quintet knows how to move a crowd.

The band end with ‘Guising, Off With Their Heads’, and Christmas song ‘In Excelsis Deo’, which also is the last song of their EP.

The band proves themselves again in front of a demanding Glasgow crowd, we can only hope that we will not have to wait another year to see them again.