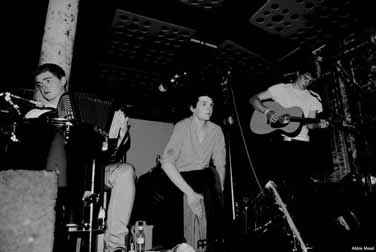 2012: apocalypse approaching, doomsday looming… the year that Donald Macdonald and the Islands come into their own.

Christ, you pick your moments boys.

The band – in its various guises – has been growing steadily in popularity for the last two years.

First came Donald, drunk of an evening (or morning, or afternoon) entertaining living rooms and balconies with songs long-written yet previously untold.

Then came confidence as he shared his songwriting with others, with deserved attention from BBC Alba’s Rapal and Glasgow based musicians such as Graeme Macdonald.

Next was a debut at the Liquid Ship, alongside Alexander Macgregor and Allan Nairn.

The small audience had mainly showed for the craic and free candy, but they left plenty happy and plenty hopeful for the new lineup.

“Band out of the womb!” Donald capers “it started out just me and a guitar but that was soon expanded on; on the grounds that you could have more banter with a second or possibly third person.”

Soon the band were touring as Donald Macdonald & the Islands, playing at and packing out some of Glasgow’s favourite venues (King Tut’s, Stereo, Captain’s Rest) and the Highland’s favourite festivals (Belladrum, Wedge).

The band, taking every gig they could get, gathered not just experience but great reviews, which enthused about the banter that Donald previously mentioned – it seemed to be what set them apart.

The refreshment of waltzing/ jigging/ reeling to modern guitar-led music: “To me a live show should be a party. It should be about enjoying yourself (band and audience), if music makes you dance, cry, jump, smile, kiss, fight, clap there ain’t no better feeling.

“I think that’s a good philosophy to go by if you play in a band,” agreed Donald, agreed.

The band learned from every support slot slayed, even the mistakes.

“She was being whoored around the freshers weeks and cameos during the usual flash in the pan chart attack.

“We were told, interestingly, and to our disbelief, it was a Frightened Rabbit support slot for Strathclyde’s Freshers week! No disrespect to Diana but what a come down that particular bomb shell was!”

Now, the band is a five-piece, incorporating Calum MacInnes and Marc Tierney, this lends itself to an exciting live performance that has been known to include *deep breath* ukulele, banjo, guitar, bass, drums, cajon box, accordion, harmonica and fiddle.

It also lends itself to a complicated jamming session *breathe out, breathe back in again!*: “blues is the genre of music I listen to most, it seems to suit most of life’s situations.

“Early American Rock and Roll, I love that, Gaslight Anthem are an influence, Brian Fallon… what a phenomenal guy!

Thankfully, the poignance, wit and originality of the Macdonald’s lyrics still assume their place centre stage throughout performances and their self-titled EP.

This is quite an accomplishment and it’s a credit to the band that they have managed to achieve that balance, they definitely seem like a band who are inspired rather than influenced.

Recently, the band rocked Oran Mor and the CCA as part of Celtic Connections, the festival is close to the band’s heart because their roots are in Highland soil; with traditional Scottish music and, for some, Gaelic culture being an important part of their upbringing.

It was clear at Oran Mor that they were humbled by the gig’s sold-out status: “Two sold out shows at Celtic, one on our own and one with Niteworks, it is mental.

“Although… it was all just because word got out that Allan Nairn was single, the men and ladies came in droves!”

As someone who was there at the early Liquid Ship free candy session, listening to the music and munching a Maoam bar, I can see how much the band have developed.

A range of genres are encompassed now, and not just fleeting attempts at each, but dedicated, stomping experimentations, the rhythmic tug of the Johnny Cash style ‘Old Style Arrow’ for example.

The finale of the night was a brilliant collaboration between Donald Macdonald & the Islands and dance outfit Niteworks: “The song was an old one of mine, well it was actually two songs of mine combined, that I quickly and craply recorded and sent to the Niteworks lads.

“They then made the song what it is, provided hooks and melody lines, and so it evolved.

“We created something quite cool.

“We’re really good friends with Niteworks and there are plans to record it properly.

“We will definitely play it again if we are on the same festival billing or anything in the summer.”

You’re going to want to be there at that festival, in that summer, trust me – if the world hasn’t ended by then.