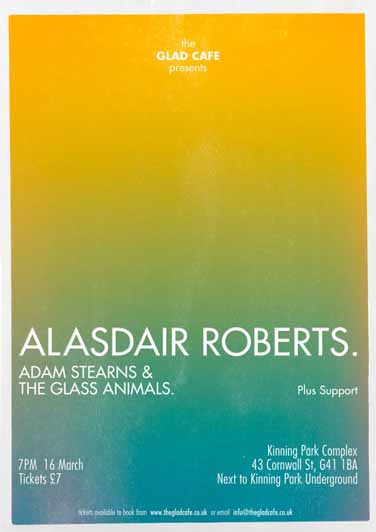 For the past few months, the local, independent art-music collective The Glad Cafe have been putting on some great events, and tonight is no different.

They’ve been moving around various venues in the south side of Glasgow, which has done great work towards boosting the artistic scene in the area.

Tonight, we are found just off the M8/77 crossover at the Kinning Park Complex which proves to be a very suitable venue for tonight’s Scot-folk leanings.

A slimmed down line-up of Adam Stearns and The Glass Animals are in impressive form tonight as they waltz through their nu-folk set with just an acoustic, violin and keyboard accompanying three well balanced vocals.

At first their set is pretty standard fare, but lots of interesting sounds and ideas slowly creep into their songs, growing to an extremely pleasant combination of folk and chamber pop.

Alasdair Roberts has been a Scottish folk mainstay for many years now, and it is easy to see why tonight.

His songs take the audience on to a astral plane of heaths and moors, thistle and hills in his renderings of traditional Scottish folk.

This brilliantly intimate setting proves a perfect one for Roberts’ music (he goes off on tour with Ryan Adams next month) which gives the evening a very special feel.

All and all, this is a wonderful night of music and Roberts’ set evokes a wondrous feeling within his songs, performed with aplomb, that gives a magic touch.