With April’s leg out Rave Child’s monthly showcase fast approaching we caught up with our headliners, and possibly biggest act we’ve had to date (at least in terms of Facebook fans) in Linlithgow post-rock quartet Penguins Kill Polar Bears, to chat about their upcoming tour and what’s next for them as a band.

PKPB and tour mates Farewell Singapore head off on a week long Scottish tour starting April 15, passing through Glasgow to play our event on the 17th at Broadcast (which is free entry incidentally so get yourself down), and the band are happy to heap the praise on their tour partners for arranging the bulk of the tour.

“This (the tour) was pretty much all on Jon (Arbuthnott) from Farewell Singapore, he had it in mind to get on the road and asked us if we wanted to do something together, we’ve helped where we can with it but he’s pretty much booked the whole thing.”

In terms of the Rave Child gig this pretty much fell into our hands after Arbuthnott approached the venue who then offered it up on a plate, which we duly snapped their hands off at, the opportunity to put on two Scottish acts of this quality and stature and still be able to offer free entry doesn’t come around too often.

Those from outside of Scotland may still have to wait to see these guys in action though as PKPB reveal no plans to take this tour further afield, but you needn’t worry as they state: “hopefully later this year we’ll be touring again, we’d like to get down south again and we’d really like to get around Europe too if we can make it happen”. 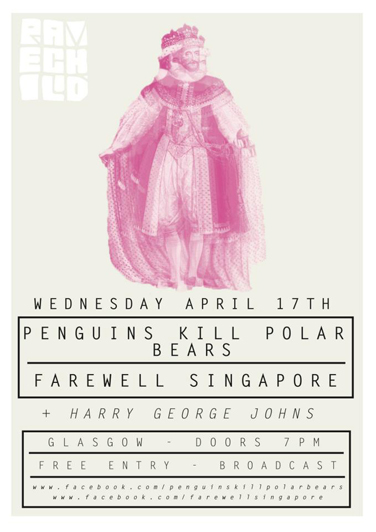 Why they’re heading out on this tour seems purely down the love of playing live and getting out on the road, as although they have a new album on the way and it’s likely they will air some new material, it’s highly unlikely the release will be available to purchase, unlike their tour mates whose brilliant double A side ‘Liar/Celebrate Your Mother’ is due out on April 1.

When posed with the question of the new record the guys are happy to concede “it’s been a while in the making”, as they started work on it over two years ago (straight after 2011’s Vessels & Veins was finished).

Over that time the band lost their bassist, but they’re familiar with line up changes, and after bringing in current bassist Gregor on board then they admit “the focus was on being match fit to play live with little focus on new material”.

“Over the past three or four months it’s been a dedicated focus on these songs that will be on the album and it’s actually come together quite quickly.

“We’re recording in the studio right now with a fair bit to go yet but we’re excited about the process of getting it together.

“We’re working with Gandalf the Denim (Marshall Craigmyle) at The Old Mill in Strathaven so we’re in very good hands, we’re really pleased about how it’s going so far and we can’t wait to get it out.”

“You should expect Ben (Proudlock) singing about death and a wall of noise at some point.”

So, with another couple of years under their belt, a stint playing with The Gothenburg Address for some of them and yet another change in line up, surely something has changed from sound they had two years ago in Vessels & Veins.

“It’s not as if we’ve gone out of our way to go for the clichéd ‘more mature sound’ or bought synthesisers, but there has been a definite effort to try and not write the same old quiet verse / loud chorus songs.

“Gregor’s brought a lot to the band since joining, the writing process has changed slightly and we’re focused on structuring the songs rather than jamming out ideas.

“We feel like we need to progress as a band, you can’t just go writing the same songs over and over again.”

While always eager to improve and progress PKPB have been compared to a lot of heavy hitting artist for their previous work, the pounding post-rock of 65daysofstatic as well as Scottish behemoths Mogwai to name a couple, and although the band are flattered by these comparisons they are equally as eager to not be pinned down by them and be restricted within the brackets of a genre.

“We don’t always agree with the comparisons but if people can relate to in any way, if they want to compare us to someone they like, that’s absolutely fine with us.

“If someone gives us a shout out and says “Check out Penguins Kill Polar Bears, they sound like such and such” and it gets us some new listeners, that’s totally cool.

“Our music is just a clash of all the music we like listening to; some of our songs are very post-rock – they’re longer, more ambient, and build up all the way through, others are a bit livelier and more vocal-orientated, then we have some oddball songs like ‘Lungs’, which is just noise and distortion for three minutes.

“We don’t have a ‘sound’ that we aim for with every song, it’s more about not repeating ourselves too much.

“Smashing Pumpkins, Manchester Orchestra and Aereogramme are all big influences, but post-rock is probably the broad category we fall into, though we don’t try and write music to that end.

“You should expect Ben (Proudlock) singing about death and a wall of noise at some point.”

Some would expect being compared to the likes of Mogwai would put pressure on a band but PKPB don’t seem to be phased by these views, preferring just to focus on what they’re doing while drawing inspiration from other artists to progress themselves.

“We tend not to think about who we sound like or who we should sound more like or less like, but we do put pressure on ourselves to improve as writers and performers… put it this way, we just heard a new There Will Be Fireworks song tonight and it’s time to kick it up a notch.”

If they’re drawing their inspiration from what they listen to it’s possible their sound could well take on a different passage, as aside from the earlier mention Manchester Orchestra the band are happy to list their favourite current acts as a who’s who of US hip-hop’s upcoming stars, listing members of the Odd Future crew alongside the likes of Action Bronson and Danny Brown as well as more performers acts like Wu-Tang and Drake.

However, it’s fairly safe to say that we won’t hear any rapping from these guys anyway soon, although Scottish hip-hop may have been proved credible by the likes of Hector Bizerk it’s a long way from being considered popular even if any of Proudlock and co. are adept MCs.

Still, they do demonstrate that there’s much more than hip-hop tickling their listening pallets these days as aside from their tour buddies, who they describe as “imagine Be Your Own Pet came from Elgin but with more projectiles being thrown at tiny photographers” – giving us possibly a story for another day and proof of they’re happiness to use comparisons themselves – they site plenty of other upcoming acts as favourites.

“The new Gothenburg Address album is going to be killer (and we weren’t playing on it this time so that’s not a biased opinion), we really like Bear Arms and we’re forever telling people about Your Neighbour The Liar.”

Finally, as I spent a good portion of my life in West Lothian myself, although I am now majorly Glasgow based, I was eager to find out the band’s views on both West Lothian and the two big cities.

The band are understandably hesitant when speaking about a favourite between Glasgow and Edinburgh (although it’s obviously Glasgow right? The tour’s not even going to Edinburgh).

“We do genuinely like both, we’re right in between the two and we have a lot of friends in both cities so they both feel like hometown shows.”

And with a with a hometown show the day after their date in Glasgow giving West Lothian a rare chance to see an established act play, the band would love to see their hometown as have a thriving music scene but admit their probably isn’t one.

“It’d be good to think that someone is running packed out basement shows somewhere in Linlithgow but we haven’t heard of any so far.”