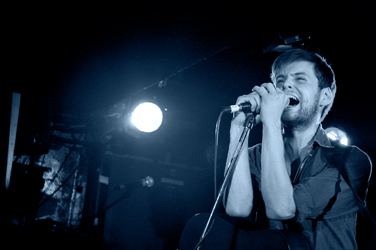 To launch their new mini-album Palomides Pt.1 (the second half is due later this year) Scotland’s most promising young band take to the legendary Tut’s stage to deliver a set of their best material both old and new.

Excluding the support act just because tonight is Washington Irving’s big night however would be heartless, especially when they look as entertaining as The Graveyard Band do.

The guitarist resembles a lost Followill brother, another the cherubic singer from Two Door Cinema Club and two more could be summarised pretty well with the moniker ZZ-Topman.

Their lead singer sports a hat with a feather in the brim and an oversize maroon jacket, while playing a ukulele – if that’s not a promising quintet then what is?

Their attempts at close harmonies are initially disrupted by tech problems, a perpetual gremlin that in its twenty years of service Tut’s seems unable to shake and when they do manage to overcome the glitches initially they’re not as sharp as they could be. 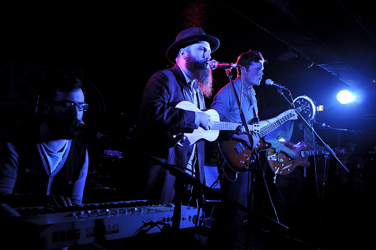 Similarly songs about driving coast to coast or cruising through the desert seem a little third-hand however when they finally hit their stride there’s enough quirky elements to their sound to make them ones to watch, with songs taking in everything from quirky Coral-like psych-pop about Hannibal and his elephants to bouncy music hall boppers that trigger heroic hipster dancing in the front row.

In front of a crowd of screaming girls and enthusiastic fans who’ve followed their journey over the past few years, Washington Irving emerge to raucous cheers and applause.

Opening with recent single ‘Holy Company’ and a searing version of fan favourite ‘Abbey Gallop’ it’s a hero’s welcome for a group who are red-eyed but unbowed after two weeks touring the country.

They’ve come a long way from the flute-assisted folk tunes that they started off playing and while the likes of ‘Sisi’ are a fantastic showcase for the group’s intelligent lyrics, it’s the new songs that really get the crowd dancing and clapping. 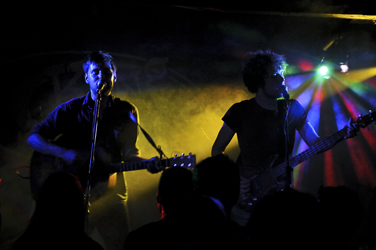 There’s a riotous righteousness to these tracks that brings to mind The Pogues or Titus Andronicus all powered by cavernous drums.

One of the songs scheduled for release on part two in particular takes the group into heavier territory than anything they’ve explored before and even the quieter songs now feature seismic chord sequences, as the young band lock into a formidable groove.

Limber basslines wind and pop, while guitar lines take in everything from streamlines American rock on the handclap assisted ‘Palomides’ to western-sounding licks and fuzzed up recreations of their old flute-folk sound.

Ending with a sing-along version of ‘Islands’ and their traditional instrumental closer, vocalist Joe Black stands on the monitor and toasts the crowd of friends and followers who’ve come together to see the band end one chapter and start another.

Releasing their new album in two chunks doesn’t have the romance of a single LP but if it’s true that the album as art form is dying then releasing the material in bite-size chunks may prove a smart move. 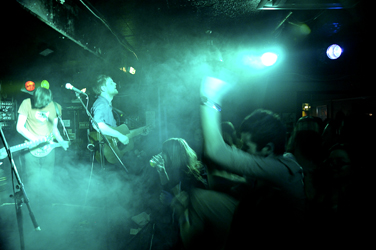 2013 was the year the most famous alumni of Glasgow’s electric folk scene, Frightened Rabbit ascended to new heights but as they soak up the glory, they’ll have to keep one eye over their shoulder.

Washington Irving are coming up fast.