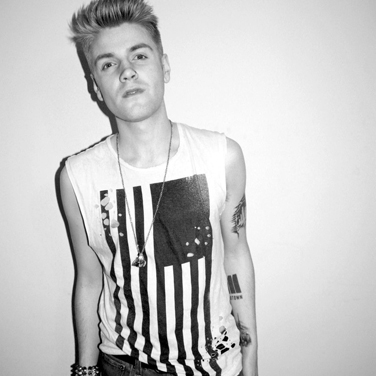 Law appears in the monochrome video clad in a leather jacket and pristine quiff; image is as important as the beat for this self-branded “electro reprobate”.

The Duke’s vocals are delivered in an irritating Americanised drawl, which jars with Scottish ears, but fits with the tongue-in-cheek commentary of rave culture and the genre itself.

The chorus of “oh-oh-oh” could have done with some imagination, otherwise, the more inspired lyrical hook – “S-s-s-Saturday night, I’m not feeling right/someone stole my drink and I’m in a fight” – is reminiscent of Trash Fashion and Jamie T on class A’s.

The repetitive beat of the chorus is jittery and infectious, sort of like your moves on a grimy dancefloor after too many Jagerbombs, 1am on said dancefloor is definitely the time and place for this record.

‘Saturday’ sounds like a drum-machine assaulting your ears with its hipster credentials, but not in a bad way, its charm lies in its sense of humour – to be played loudly.