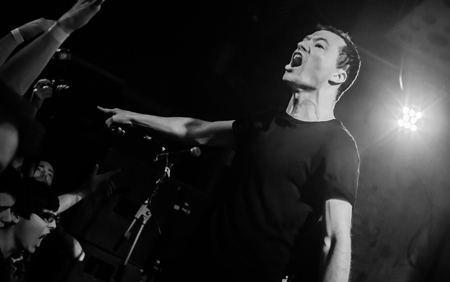 The post-hardcore loyal are out in force tonight for a rare headline tour appearance of Touché Amoré following the release of the highly acclaimed Is Survived By.

Dad Punchers are up first, with an Americana pubescent punk noise.

They describe themselves as bummer punk, which explains how they manage to get away with introducing a song: “this song is about sharing a flat with a girl you’re in love with who you hear fucking every night,” and not lose the attention of half the audience.

The rather bizarrely captivating Self Defense Family follow with a La Dispute-esque style of barking poetic words over repetitive soundscapes, their performance is tricky to get your head round.

With far too much stage banter and a completely mind boggling frontman, Self Defense Family will either be your most important act in the world or a piece of trash – and it seems the band want it that way.

To the uninitiated, songs will blur into one large post-hardcore mass, but in an hour’s set they manage to play a sizeable chunk of their discography thanks to their typically short track lengths. 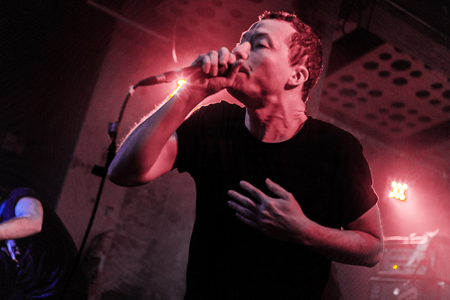 A clear highlight of their show is ‘Gravity, Metaphorically’ from their split EP with Pianos Become the Teeth, but their set is relentless and frantic from start to finish, and the front rows respond to the energy on stage accordingly.

If such a thing as “the wave” exists in the post-hardcore genre, then Touché are at the top and riding it high.