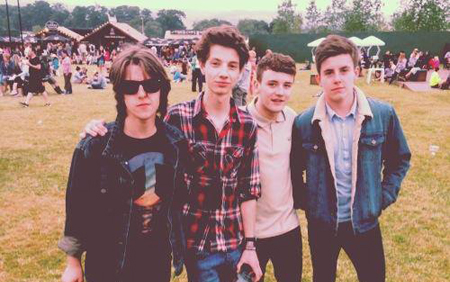 Two nights and two venues were the call of the weekend with Alt Waves Takeover, tonight we were in Sleazy’s and if everything else went as well as tonight the weekend will have been a total success.

The three bands are out to impress the healthy crowd tonight and the whole event has a nice feel to it with the young bands demonstrating what they can do for punters soon to be finishing work for the holiday season.

First on the bill is Jane Bolts, the five-piece begin their set with an air of caution and at times you can they go slightly out of time, however the frontman, Josh’s character and confidence galvanize the band and they get stronger and stronger as the set goes on.

Visually the band differs from one another and it seems to reflect in the music, often you can pick out a guitar riff that you may expect from early Bloc Party, at other times the vocals sound like a softer version of Enter Shikari.

Constantly with a high tempo and an aggressive playing style, the band make a big noise with tracks like ‘Bury Me’ showing their true credentials.

With a quick change over time, Bacchanal Party are on next and the three-piece, if not already there, sound close to the finished article.

The whimsical guitar plucking style along with the upbeat rhythm section provides a summer sound on this winter night and the crowd respond well.

Touches of Friendly Fires and Vampire Weekend along with the broad Scottish accents makes a great twist to this branch of indie rock.

Their lyrics are not complicated but in their own way have a poetic touch to them, words that any punter can relate or even have a laugh to with songs telling stories of typical club nights in Glasgow.

The band close with their most popular track ‘Mandy’ and the psychedelic sound adds a touch of class to the end of the performance.

To end the night we are treated to the well-styled Model Aeroplanes and despite being disrupted by a broken guitar strap and the guitar landing on the frontman’s foot, the band show strong character and recover quickly to provide tracks that ranged from deep harmonies to warm guitar licks.

Although still very young, the band look experienced and conduct themselves well on the stage, clearly inspired by acts such as Kings of Leon and Eagles of Death Metal this band give a solid rock set to finish a great night.