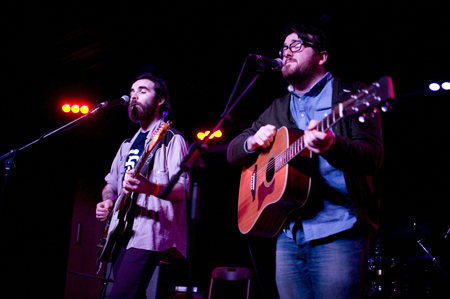 Indie had more of a presence in this year’s Celtic Connections line-up than I’ve noticed before.

Two gigs in particular have the indie bands stacked up; the Olive Grove Records Showcase and Hazy Recollections.

Each gig has plenty on the bill and is almost one-day festivals in themselves!

The first is an evening of various degrees of rock held by enthusiastic bloggers Halina Rifai and Lloyd Meredith.

The second is an afternoon of indie with Americana and hip-hop touches hosted (and performed at) by Findlay Napier who also hosts the Late Night Sessions.

These gigs seem to be big ticket sellers with both venues looking surprisingly busy for a Sunday.

At the Olive Grove Records Showcase, an overwhelmed Meredith pogos onstage and announces with glee that the show is officially sold out.

At Hazy Recollections, Napier also expresses gratitude to the audience for coming, and notes happily that the size of crowd seems to get bigger with each year.

It is good to see the organisers who have made these days/nights happen feel rewarded.

In both cases the events are run by people for people; Napier originally organising Hazy Recollections because he wanted to get his music out there and Rifai and Meredith starting the label to get others music out there.

A confession, however, after 10+ world and trad gigs it’s surprisingly difficult to get back into the guitar-band mind frame.

After more than a week of wonderful costumes, different languages, guest appearances and one off performances it is surprisingly difficult to get used to again; I feel desensitized, yet, still, here are some highlights:

The Moth and the Mirror who include members of various bands (Admiral Fallow, Frightened Rabbit, Arab Strap, etc) sound heavier than expected, in a good way!

If you’re more accustomed to hearing Admiral Fallow it is difficult to get used to Louis Abbott being a backing vocalist but Stacey Sievwright has a great PJ Harvey intensity.

Woodenbox play a laddy, bouncy set with lead singer, Ali Downer, wearing a tan suit and a coat of swagger.

Brass adds depth to their fun and shouty stage presence as they seem to sit somewhere between the Black Keys and the Libertines.

They have the crowd dancing for the first time in the day… and by the end some of the crowd are dancing onstage.

They both sound great and perform with a sense of humour that folk often lacks, however, I feel like I’ve treaded on the acoustic path too many times this week and the grass, through no fault of its own, is wearing thin. 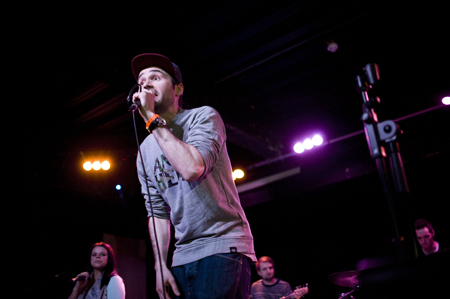 Stanley Odd themselves play an interesting gig today that undoubtedly wins over members of the audience that were there for the folkie experience.

After bridging the gap with a simple “hip hop is like folk music with caps instead of cardigans, they both tell stories through songs,” the Odd hit the audience with a short set of great songs and more freestyling than usual.

Today, some of the lyrics of songs they’ve played countless times before are changed to be bang on the money relevant.

A sweet moment is the crowd congratulating singer Veronika on her pregnancy.

This is my first time seeing Fake Major since they were Endor, as a fan of Endor, I’m relieved and smiling to hear what I hear.

Their voices complement each other so well and the combination of electric and acoustic again.

‘We’re the Same’ has the kind of gorgeous, layered harmonies that somehow sound larger than two people while retaining a tender, conversational quality.