There are any number of excellent Scottish adjectives that can be used to accurately describe The LaFontaines’ live show… gallus, mental and pure brilliant are just a few that spring to mind.

The, as yet unsigned, Motherwell quintet’s unique blend of hip-hop, rap, pop and rock has won them a fiercely loyal fan base, who turn up in their droves to support the band’s first headline gig at the iconic Barrowlands.

Support from Model Aeroplanes and Eliza and the Bear warm up the room nicely, and the headliners swaggered on stage to a deafening chant of “The La, The La, The LaFontaines” from the hyped crowd.

Wasting no time, and notching the atmosphere up to frenzy, the band kick off their high energy set with album track ‘Slow Elvis’, a racing, crashing banger of a tune. Irrepressible frontman Kerr Okan roaring “I am Glasgow” has the hairs on the back of my neck standing up and it is evident we are in for something pretty damn special.

Skilfully combining Okan’s tongue in cheek, highly topical, social commentary with John Gerrard’s soaring, and rather beautiful acoustic vocal, The LaFontaines are musically tight, and album title track ‘Class’ is a prime example of this.

I don’t like to pick favourites, but ‘King’, the first single taken from the new album, is worthy of particular mention.

Breaking from the new album, and to the pleasure of the stalwart Font fans, the set features favourites ‘Pon De Fonts’ and ‘Shark in the Water’, and the Barras is transformed into a massive, sweaty, happy mosh pit.

By this point, Okan has spent as much time crowd surfing as he has on the stage and towards the end of the evening, has lost one (or possibly both) shoe/s, much to the delight of the room. 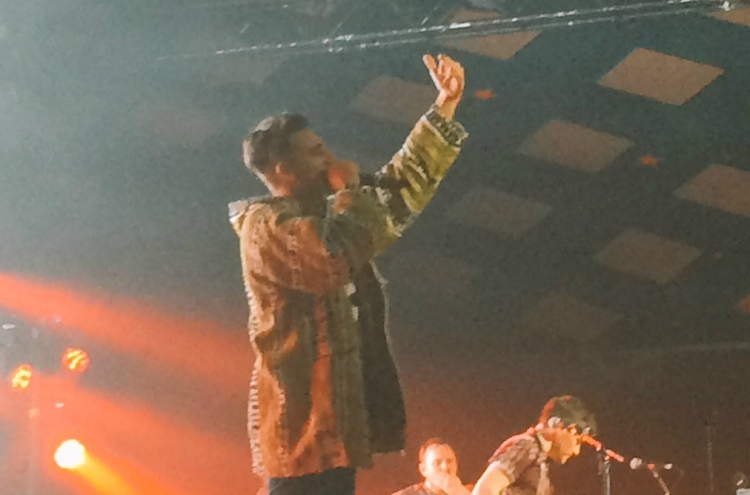 Okan also took a break from rapping to toast both fans and venue with a bottle of Buckfast, expounding on how much it meant for the self-promoted, self-funded lads to be headlining the Glasgow institution.

Drummer Jamie Keenan, singing the now near-legendary ‘Canny Get Ma Granny Aff the Drugs’, is a little difficult to explain to my friend, who was experiencing ‘Font Mania’ for the first time, but this unexpected highlight epitomises The LaFontaines’ ethos.

Last month, to promote the gig, they took to the Barras Market to flog their own merch and tickets, and during an impromptu set, Keenan gave this a bash, just for the banter.

The resulting video, taken on someone’s phone, went instantly viral much to the band’s surprise and delight.

As previously promised on social media, the set closed with crashing cymbals and endless, screeching feedback.

Also as promised, The LaFontaines did indeed bring the biggest party of the year to The Barras.