20 The Vegan Leather – This House

A work that possesses both the sincerity and conviction necessary to remind any listener than pop can be more than just clean synths and solid marketing. While it in part feels like the gritty precursor to a potential masterpiece, This House is a vibrant and exciting lesson in punchy, hook-laden art pop. (Michael Mavor)

19 Quiet as a Mouse – Memorybox

Memorybox contains a mix of delicate and lively tracks that create a successful taster of Quiet As A Mouse’s potential conveying their ability to create gentle, intricate tracks. They have an album planned for 2016 and, judging by this release it will be something to look out for.

Cheerleader showcases how well Cal Donelly takes to the solo role; it’s full of head sticking choruses, rumbling lo-fi guitars and up tempo, toe-tappers, before closing on the slow gritty ‘I Give Up’. Cheerleader raw and authentic; it’s like one of those Brain Licker sweeties that were popular in primary school – enjoyable and addictive with a sour kick.

Say It’s True consists of seven songs that are each crafted to complete perfection: from the striking acapella opening of the title track to the vocal leaps that bring the record to a close, the EP in its entirety is a remarkable feat of musicianship. Wilson fuses traditional elements of folk with layers of more contemporary sounds to create something unusual and beautiful. (Ellen Renton)

Glasgow six piece Golden Teacher opted to self-release this dubiously named EP and it is yet another solid and at times excellent bit of kit; high quality stuff from a gleefully enthusiastic bunch. Sauchiehall Enthrall is otherworldly and a vivid offering from this unique collective, who incidentally are a formidably high octane live proposition, if clearly mad to a man and woman. Hard funk, groovy, ear-melting drums, ethereal bleeps, banshee yelps and a touch of acid – what’s not to love?

Spinning Coin is the coming of age of a group who combined have been in about a million bands, all of which contributed something to Glasgow. Coin might not have a coin among them, but they have the Mac Demarco guitars, running out of battery sound and the posture of pavement; all without copying! (Paul Choi)

Think 90s lo-fi rock but up-cycled. The Bellybuttons deliver a neat set of tracks with all the key ingredients that make it hard not to like. The EP opens the door to a world of skillful pitch bending riffs, before things start to pick up with ‘Hard to Read’, showcasing their ability to bring energy to a track with a little taste of bluegrass thrown in. ‘Solar Envy’ brings you back down to Earth in a soft cloud of husky vocals before playing with your mind in ‘Sad Boys’ with an elongated, suspended and distorted outro leaving you to wonder what the guys will come up with next. (Rachel Cunningham)

Way Back Home sees Mull-based songwriter and guitarist Sorren MacLean bring tasteful, strong arrangements, topped by his widescreen, yearning vocal. MacLean is obviously well aware of folk music traditions, but there’s a pop sensibility too that ensures the melodic hooks are strong and memorable and this EP sounds equally good sound tracking a summer’s day as it would a dimly lit folk club. 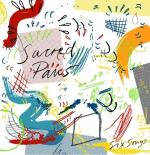 It must have been a ridiculously busy year for Rachel Aggs, with this EP and releases from other bands Trash Kit and Shopping coming in quick succession, but never have her releases lacked in quality. Add to Aggs’ jaunty, clean wiry guitar tone the up beat snare drum centric beats of Eilidh Rodgers, the duo’s fresh energy and overlapping vocals that give a sense of the free spirit, and you’ve got Six Songs; a playful polyrhythmic EP that is as refresh as a tropical breeze.