Song, By Toad’s showcase at The Glad Cafe features three of the label’s roster performing a Fringe show of the BBC Radio 6 Music Festival.

Opening the night, the sound of Siobhan Wilson’s soft, soulful voice gets things off the ground.

She plays with a unique deftness, her electric guitar’s clear, low tone works with delicate melodies sung in an often oscillating and breathy style, sounding something like a mixture of Françoise Hardy and Anaïs Mitchell.

The set finishes and I’m wishing she’d keep playing, Wilson’s recently started to work more with Song, By Toad and has an album coming out that we’re looking forward to hearing. 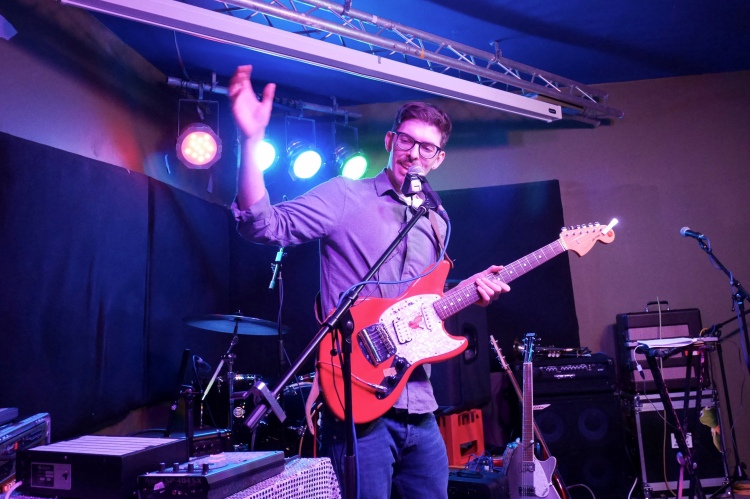 The second set of the night finds Jonnie Common in spirited form; he’s a humorous and talented man with an array of intricate samples at his fingertips and feet.

He plays guitar and is joined by a friend arriving in a sweat to accompany him on flugelhorn, at intervals throughout the set, he tunes his guitar while the sound of an orchestra is played through the speakers, and apologises for this, blaming Kurt Cobain for the amount of tuning needed on a Jagstang.

There’s an understated version of the song ‘Shark’ played at the end of the set that includes a sound bite of Lauren Laverne doing the “it’s a secret” line, which goes down quite well.

While there’s a lot of humour, in his lyrics and in the dynamics of the music, Common’s a sharp writer and skilful musician for sure.

Meursault is something else; they begin with feedback screeching through the room before curtailing into the set.

Neil Pennycook’s idiosyncratic reckless abandon is something that makes you feel like you have no idea what will happen next, the climatic end of ‘By Gaslight’ sees Pennycook’s guitar on the floor while he careers up and down the fret board with his foot, singing the repetitive final lines of the song in a mantra-like frenzy before saying something like “sorry, seemed to lose myself a bit” once the music quietens.

The set is mostly made from songs from their 2016 EP Simple Is Good and new album I Will Kill Again, though an amazing rendition of ‘Flittin’ from 2012’s Something for the Weakened makes its way in there.

When they play ‘Simple Is Good’ it’s like a moment of calm in the storm, a few times Pennycook signals to the sound guy to completely cut the sound so as to perform acoustically, as the band make use of the upright piano that sits just off the stage.

At one point Pennycook is lying across piano and accordion player Reuben Taylor, bending over backwards and singing his heart out, later on, he’s handed his guitar to a crowd member and gone over to sing into the inside of the piano.

The whole set is fuelled with uninhibited and compelling music and just before the band start their encore, the bass player quips that the show could do with some more passion, which draws a laugh from the crowd.

They play us out with Neil Young and Crazy Horse-esque looseness and I’m still buzzing on the bus home.

I Will Kill Again by Meursault