Festivals, especially ones as full on as Riverside, inevitably provide snapshots: moments and memories that add up to a faintly confused and nebulous whole; often intensely vivid but scattergun, nonetheless

That’s perhaps the whole point – an array of experiences that don’t fully make sense but nonetheless coalesce into a hyperreal survival task.

So it is that perhaps one of the standouts from 2017’s romp around techno and house by the banks of the Clyde ironically enough involves… neither house… nor techno.

Three stages for this shindig and the tiniest of the lot – an anything goes, Balearic micro-festival all of its own – manages a perfect though somewhat incongruous moment: as New Order’s ‘Blue Monday’ batters into life – a joyous thing in itself – the Waverley paddle steamer comes careering up the glassy river with a loud honk of its horn with its own crew of party people hopping up and down going mental on deck.

It may not quite be a Russian oligarch’s three-mile long superyacht swishing past Cafe Del Mar in the sunset but it’s damned close: all ashore yelp, all aboard do the same, stuff is chucked about and all is right with the world.

For all the purity and exceedingly high-quality and upfront electronic music on show across the two days of madness, that brief, never to be repeated alchemy hits a particular sweet spot.

Now in its fifth year, this jolly jaunt down by the imposing Zaha Hadid-designed museum has always cherry-picked from the cream of global electronica along with a good old splattering of local talent and 2017 is no different: across a total of 28 hours including afterparties – enough to test even this good to go observer – we get everything from Telford and Jackmaster through to Nina Kraviz, Loco Dice, Sven Vath, Rødhåd, Derrick Carter, Surgeon and of course Slam.

That is a cursory and clipped flip through the bill: whether you’re after four to the floor stripped back mayhem or more organic disco-inflected sounds, as long as you have a map, a pair of legs and a fistful of drinks tokens, you’re good to go.

In one enthusiast’s case, a rather massive inflatable rubber ring seems to be required outfit: for sure she could float around past the sunset area to the next part of the site but that would necessarily involve negotiating the dreaded slipway swans, sullenly guarding their river-based access point to the festivities; a perennial feature.

A rash decision indeed to take on those stoic beasties, particularly when observing one enforcing its territory by chucking sticks about in the vague direction of the sweaty throng.

What that does illustrate is a sort of abandon that pervades the whole event: we may be but feet away from the traffic but once inside, Riverside is a world of its own: whether chilling on the grass under the silver birch trees or going at it down the Cocoon stage, it’s a fully enclosed world of varying grades of delicious chaos.

Worth noting that a slightly less toothsome version of chaos affects the weekend: the British Airways meltdown means that the aforementioned Kraviz comes gambolling on site slightly late yet is on the decks in three minutes; impressive stuff, though one suspects the odd heart attack for the organisers.

That she delivers one of the sets of the weekend with her typical locked grooves is testimony in itself.

She plays to a roadblock at the Pressure stage and the resulting jollies by the lively Saturday crowd means the staff give up preventing people clambering on the walls to wave their arses about: again a testimony, this time to how well she actually plays having finally arrived.

At the same time around the front, Sven Vath does what Sven Vath does: it’s a little too obvious to these ears – big riffs, bangers and all – but the kids love ‘im: in the drizzle, shoulders are clambered on, and umbrellas are chucked about… thankfully the fish and chip concession is shut as a flying haddock is de trop in any culture.

And so, like that notional fish, we negotiate the site pausing only to rehydrate at the pleasingly relaxed Prosecco stand, the necessary to keep things flowing along, you understand. 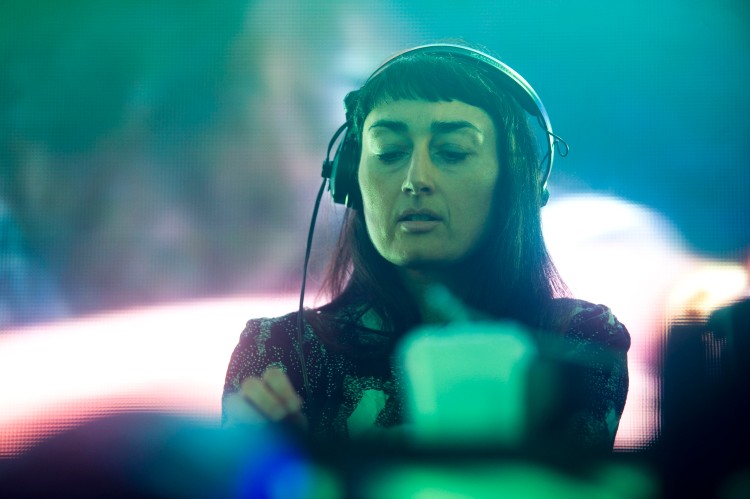 The standouts are, pleasingly, not solely the biggest names on the bill: for sure Loco Dice closing events on Sunday is an absolutely massive, rattling beast of a set but a late afternoon outing for Paula Temple the day before is no less impressive: one to bust a gut to see if she brings her cheerful presence and powerful grooves anywhere near you. 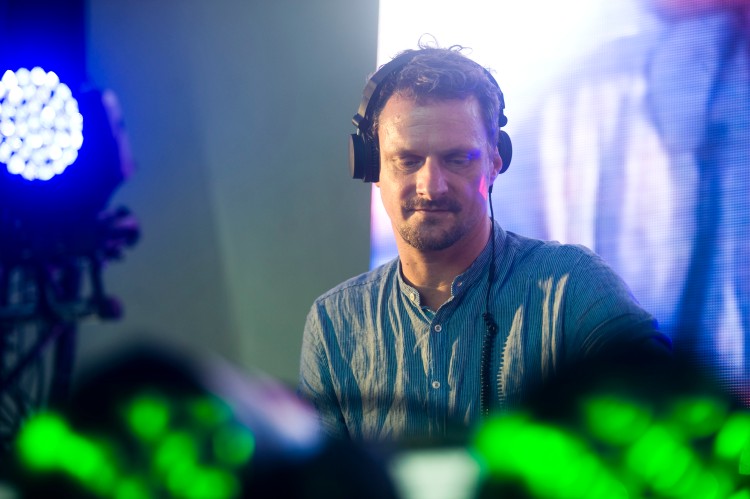 George FitzGerald and Scuba go back to back on the slightly more relaxed Sunday evening and get the crowd going without at any time resorting to the obvious; a class pairing, working in harmony together and hitting bassy groove after bassy groove; a near-perfect lesson in less is more and one which gets a phone call from half a mile away enquiring who is playing the excellent tunes seeping into a garden barbecue. 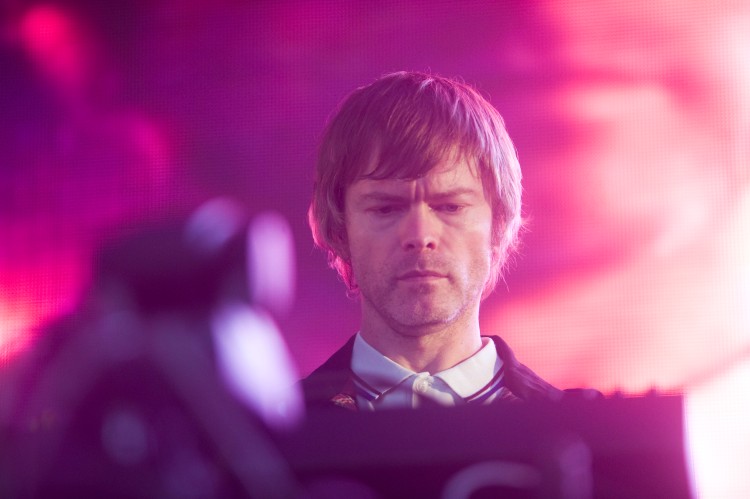 Amongst the other ne’er-do-wells on offer, Surgeon delivers an uncompromising, purist and jacking live set whilst looking like he’s puzzling over a cryptic crossword with his pleasing lack of audience interaction.

Derrick Carter hits spots so sweet that one cheerful fellow going on near two days without sleep – and yet still alarmingly coherent – confidently declares it set of the weekend.

We’ll close such admin by noting that Slam – playing three sets across the weekend, including the afterparty on Saturday – predictably step up to the plate, particularly when going back to back with a gleeful Alan Fitzpatrick: it’s a perennial observation that you expect them to be brilliant because, well, they always are.

When Rave Child eventually tumbles into the Sunday night afterparty to discover a micro-club within the SWG3 complex being manned by Fitzgerald and Scuba yet again: all is pitch perfect and that extends to the pleasingly frazzled but still good to go punters.

This bank holiday always delivers in one form or other – see the collapsing bar-fest, of a year gone by – and 2017 nails it on pretty much every level.

Whether you are a wryly amused policeman keeping an eye on the frothy proceedings and fending off friendly hugs, a quizzical starling wondering who these noisy buggers are hopping up and down by your normally quiet perch, a silver goblin escaping the Coors ice cave thingy or a tops-off madman going at it for 48 hours, this Riverside certainly throws up an event: that amorphous thing where you know it’s going down, even if you can’t quite explain why… beyond the bleeding obvious. 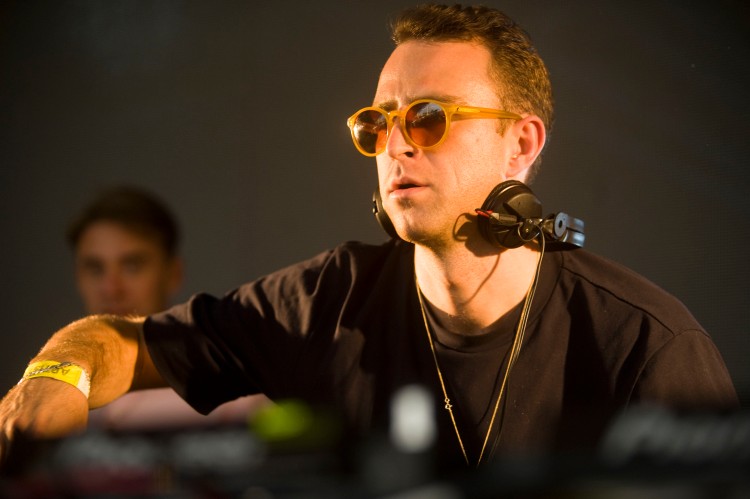 Towards the end of Sunday night, Jackmaster pauses his set – a fine enough but slightly too sequential effort – to take note of recent terrible events in the UK: “GLA 2 MCR” projects in black and white, bordered by the setting sun; Glasgow and Manchester, cities with a long musical bond and a real moment of solidarity.

It’s very touching and, in an utterly respectful yet perfectly in keeping gesture, ‘Voodoo Ray’ by Manchester-born A Guy Called Gerald is then played.

The Hydro is lit up in rainbow colours along the river, people dance, smile, roam about and… do what people do.

That, perhaps, is the most abiding image amongst a heap of fractured memories.