Day two starts on a fragile note as midday proves a touch too early to drag myself down for Bella and the Bella, so my day starts lulled next to the sound desk at the Main Stage sipping orange juice from the carton in the sunshine, with the somewhat depleted Palms boys, who still seem more in shape than I am, as The Van T’s deliver another fun filled set crammed with 60s surf vibes and glittery girl gang attitude.

We’ve covered The Van T’s so much in the last year that it’s difficult to come up with new words to describe their set, regardless they never cease to be enjoyable and today’s set takes on a very special significance when you consider the four-piece nearly didn’t play.

As mentioned in day one’s coverage the passing of The Lapelles frontman, Gary Watson, has hit the Scottish music scene pretty hard and for The Van T’s it not only meant the loss of an individual with tremendous potential and talent, but also the loss of a very a close friend, and it’s fitting that the band request that the festival crowd “go fucking mental” today as that is what their friend would have wanted before closing on a cover of The Lapelles’ ‘Seventeen’.

Over at the Stewart Cruickshank Stage there’s another act that we have seen so many times in the past year but never tire of, truth is we love what Be Charlotte is doing, and have been championing her potential to go very far since first seeing her over a year ago.

It seems ever time they play the live set steps up a level, the music, accompanied by Charlotte Brimner’s voice, has always had the ability to silence a crowd with acapella beauty, get them moving with chart heading hits or engulf them with experimental brilliance, but Brimner’s presence and all round stage confidence just seems to grow.

Next up are THE NINTH WAVE, who seem to have added an extra shimmer to their sound and in the reasonably busy tent there’s a glossy swagger to them.

Haydn Park-Patterson’s vocals sound more up front complimenting their bouncing electronic indie rock sound; each track seems to pack a punch above what they’ve managed before and another tribute is paid to Gary Watson in the form of a “Gary fucking Watson” chant.

C Duncan has the fortune of the sun baked Main Stage and their sound is perfect for a seat on the grass as calm soothing, hypnotic harmonies drift over the field and set a real harmonious vibe across the site before the more riotous bands take the stage later on.

The lush sounds of Christopher Duncan’s debut album Architect has drawn praise from all corners, including a Mercury Award nomination, and this may well be the perfect setting to witness it in.

Up next is Glasgow folk rock behemoths Admiral Fallow and it’s pretty much the same chilled sunshine perfection, their deep, folk tinged rock is maybe not as settling as C Duncan, but the vocal dynamic of frontman Louis Abbott and Sarah Hayes is delightful and at times soaring.

The set is interesting, intricate and expansive, calling on the impressive talents of all six musicians on stage, as Abbott adds his strong lyrical content to a tone that’s just right side of catchy for a sun kissed afternoon set.

There’s the tendency for Admiral Fallow to be written off as your typical miserable indie rock band, but they shouldn’t be and they prove this here with tracks that easily get people moving and demonstrating why they are as popular and acclaimed as they are.

Much like Elara Caluna yesterday this is my first time catching West Princes in a live setting, and once again I have no idea why.

Their set is a beautiful sunshine filled ride, it’s jaunty indie pop, with impressive vocal interchanges just one of plenty extras that set them apart. The sound in the Tim Peaks tent suffers a bit towards the lower end, but the band still manage to get your feet tapping with funk filled licks and smooth guitar lines that expand to something with real groove. 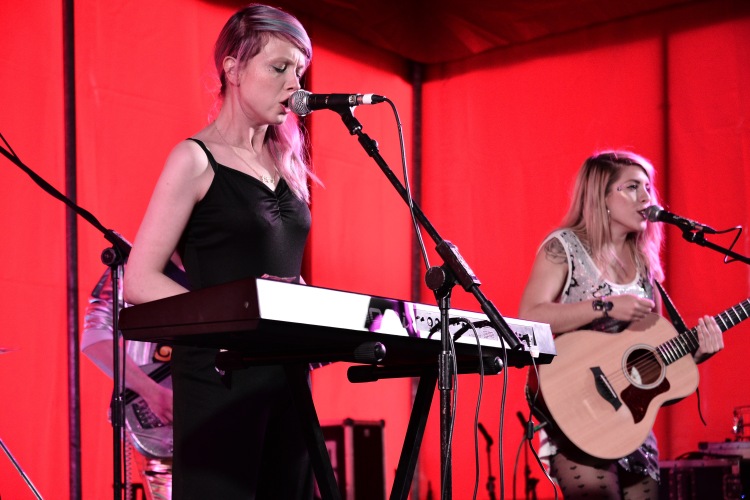 Up next is one of the highlights of last weekend’s Doune the Rabbit Hole, TeenCanteen, and their shimmering indie pop sound is yet again a delight in the Tim Peaks Tent as every track drips with sweetness and pure infectious sensibilities.

It’s hard to watch these girls without a smile on your face; yes, Carla Easton’s distinctive vocals could be considered somewhat of an acquired taste, but accompanied by three part harmonies they’re addictive and powerful, and as the glittered up girls debut tracks from their upcoming album, Say It With A Kiss, you’re left with an inkling of something special to come.

Back at the Stewart Cruickshank Stage Fat White Family get the evening going in proper fashion with a powerful punk set that gives all the impressions of not being slick without ever sounding it.

It takes a couple of songs before Lias Kaci Saoudi has gone topless and his sneer, ranging from pure evil to proper fuck you snarl, fag in hand and all, is encapsulating.

The crowd is at the rowdiest I’ve seen all weekend as flailing arms and pits break loose fuelled from the powerful performance onstage.

Following up that riot is The Go! Team, who’re a completely different prospect bringing a vibe of disco scratching indie rock crossed with Rocky theme song to get people moving in a new way.

Ninja’s lead vocals seem to get a bit lost, but it’s the euphoria inducing samples that make this band’s sound special; at points they go full on folk tinged indie pop, but there’s something very fun about their The Go! Team presence that makes them the perfect act for this time in the festival.

After popping away for a glimpse of Primal Scream then a wee dance to Eclair Fifi I end my weekend with easily the most fun band on the bill; Songhoy Blues.

You have to fight yourself not to dance to these guys and the enthusiasm from on stage just transmits to the crowd with minimal effort.

It’s a joy to see a band having this much fun, the bluesy pop sound of the Mali based four-piece oozes tradition, but also positive vibes and the inhibition to dance; the perfect end to the festival.

Then just as the bell rings on the last act of the evening and everyone is heading back to their tents the heavens open, it’s as if the festival made a deal somewhere, but whatever happened we’re not complaining as it’s been great,

Electric Fields is fast becoming one of the highlights of the summer.